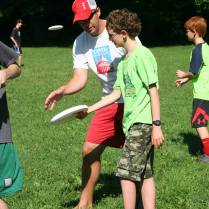 CUC has assembled an amazing team of coaches who have played and taught ultimate all over the country! These coaches have years of experience and many have played and instructed on the national level. The 2022 staff includes:

If one man is responsible for the thriving youth ultimate scene in Virginia, it’s Dave Soles. Dave is passionate and dedicated to the idea of getting every kid to play frisbee.

Dave has been a teacher in Arlington since 1996. He taught chemistry and P.E. at HB Woodlawn for over a decade, and after a year living in Africa, is back teaching Algebra at Washington-Lee.

Dave began playing frisbee in 1993 at William & Mary and hasn’t looked back since. He created and coached the YHB boys from 1999-2005 and, when Will took over as head coach for the boys, Dave shifted his focus to developing a strong women’s program. From 2005 to 2012, Dave organized, recruited, and coached girls at all levels for YHB.

Dave’s hard work established the YHB girls as the most dominant program in state history. The YHB girls are the reigning State Champs since 2008 and look to continue their strong tradition of winning this spring.

After returning from Africa in 2012, Dave accepted his current position at Washington-Lee and formed the W-L team. His experience coaching, working with administrators, and building the YHB program will ensure that ultimate becomes a staple sport at W-L.

Dave’s love of life is contagious and his irreplaceable energetic personality is the foundation of the fun, inclusive environment at CUC.

Zachary Norrbom – Director  Zach’s first came to CUC as camper in 7th grade.  He has not stopped playing frisbee since.  He went on to be the captain of the HB team in high school and Mary Washington team in college.  His team mates made this video about him and he won the Donovan award for being the BEST PLAYER IN THE COUNTRY IN HIS DIVISION (Note: We do not guarantee this level of outcome for all our campers). He currently is a handler for Truckstop and the DC Breeze.

This fall Zach was the coach of YULA ACEs (Arlington County Elite). This is the select, travel team of Arlington’s best high school players. Under Zach’s coaching they went 4 – 2 against college teams, beating Cornell University amongst others.

Zach mainly coaches the Career Center Open Team which he has done for the past 3 years. He has helped build that program from the newest team in the county to a real contender.